ZombieKeys, although originally written to be keyboard only, now has finally got a nice interface which makes it easier to use, especially for those who work with it for the first time.

Originally I only wanted to display the existing keyboard shortcuts sort of as a reminder, but I then realised that for some it might still be difficult to use them or understand the concept behind Zombiekeys. Therefore I thought why not tie this in with an alternative interface that allows to access the shortcuts without pressing lots of modifier keys. And at the same time I would display the shortcuts for the advanced users so one could switch to keyboard only when to much mouse activity was starting to get on one's nerves. :) 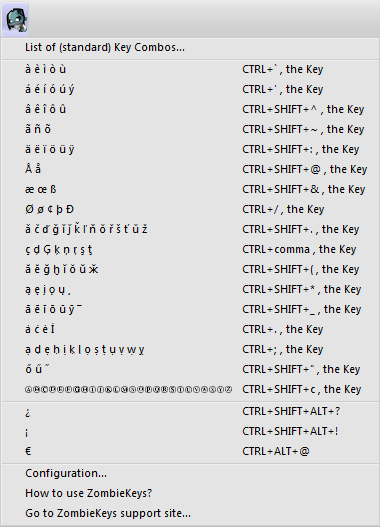 Another problem I had with Zombie Keys is that it was originally created with an American Audience in mind (or at least with those who had American keyboard layouts) so I set out how to remedy this. This was a major undertaking as a lot of the hard coded hotkey combinations had to be reviewed for their usability due to the different location of dead keys such as ' or ~. To best visualize this I decided to use some keyboard layouts from WikiPedia, and set up 2 main flavors to get started: UK and US English. Once I get the code into a more generic state, other layouts may get added in the future

To switch the layout for using different shortcuts, select the "Configuration..." item from the Zombiekey menu. 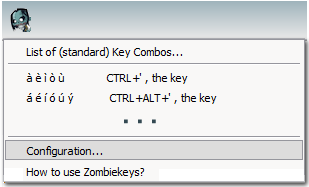 This will display the configuration screen, which is currently just a selection for the language layout with a screenshot.

Just select a language and click Ok (Close). You might have to restart Thunderbird / Firefox / Mozilla to fully activate the layout, as some parts of the UI are configured via XML and I currently have no way of influencing them directly.

Attribution: the images for these layouts come from http://en.wikipedia.org/wiki/Keyboard_layout and are submitted to the licenses that are listed there. Please attribute them if you are going to use them in your own works / derivatives.

Click here for some diagrams that show the actual country specific shortcuts.

While working on the list of possible diacritics I found this very useful site, that displays the current shortcuts supported using a US keyboard with international layout under Linux: http://dry.sailingissues.com/us-international-keyboard-layout.html

With this, I started to realize that there was a vast amount of diacritics espciallyu in slavic languages that were not even addressed by the original shortcuts that currently supported by Microsoft Office (this is where the original Zombiekeys idea comes from). So I set out to make a more complete list; when you drop down the keyboard on the Zombie Head you will pretty much see the characters that are (or should be) now supported by Zombiekeys: 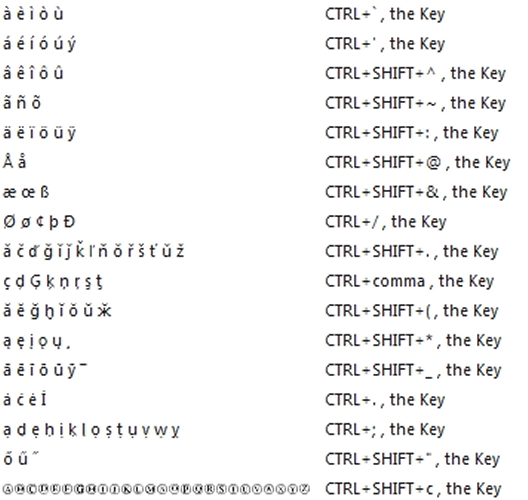 Most of these were "mined" from the totally awesome Unicode Search at Fileformat.info. This is a very valuable resource if you ever have to do anything exhaustive with special characters within the Unicode character set. Be aware that a lot of cheap fonts do _not_ support displaying these characters correctly, it has to be a fully Unicode compliant font, such as Arial.

The official list of supported diacritics is as follows:

Older versions can be downloaded here, although I do not recommend it; you can also download some of the pre-releases which fix ongoing problems and tryout new features - no warranties that features will be the same in the release version. Some of these might also be on bugzilla as patches.
I usually fix bugs fairly quickly but you might find some of these buggy - you have been warned.

All dates are displayed in UK format: dd/mm/yyyy - you can request any version that is marked as not released or any old version listed; just send me a personal email...

I (Axel Grude) joined the development team and started to take over administration for the ZombieKeys project which was handled by Kai Bolay up to this date.

QuickFolders (Thunderbird / Postbox) takes the pain out of working with many mail folders; has currently 22,000 daily users and is the top rated message reading extension.

SmartTemplate4 (Thunderbird) SmartTemplate4 offers an easy way to customize Thunderbirds default quote header by using templates. Templates can be created for every account as well as for global settings.

QuickPasswords; this is a very neat and quick way to retrieve and use a growing number of passwords, without displaying them on screen or having to re-type them.

quickFilters (Thunderbird) Quickly generate mail filters on the fly, by dragging and dropping mails and analyzing their attributes.